The FLARM is source to a data stream obeying the NMEA protocol, issuing bulks of data every second. One type of data record among those in the bulk are PFLAA records.

They also contain information about ADS-B data and about FLARMs in stealth mode.

It is possible, as done by other ACL switch manufacturers, to engage/disengage the flash solely based on the above mentioned alarm info contained in the PFLAA records.

IMHO that solution is not satisfying and by far too weak.

Here is why I think so:

When activation of the flash is tied to FLARM alarms, the flash will be activated even as the threat comes from the rear quadrants of your own field of vision. The "opponent" in that situation is not even able to see the flash. So why flash ?

FLARM alarms occur relatively late. FLARM alarms, even in head on collision situations, appear 25 seconds before impact (starting with FLARM protocol version 6 that is down to 18 seconds warning). When two planes approach at 200 kmph each, then 25 (18) seconds warning translate to 2.74 km resp. 2 km distance. That is not too comforting. That is when this notorious glider search game frenzy starts, when blood pressure soars, the situation all glider pilots hate.

FLARM alarms for opponents in stealth mode appear at threat level 3 only - by far too late. Flashing is already useless, to the contrary, it might even create panic in the opponent and thwart his reactions.

Of all those FLARM alarms which could possibly activate the flash, in average half of them is futile and the rest appears so late, that the threat is emminent.

IMHO - The strategy should be different:
The threat situation should be avoided altogether.

FLARM was designed to warn you from other planes creating a threat to you, not to activate a flash.

What is needed is the opposite, the warning of the opponent of your approach at a maximum distance.

That would help to avoid the threat situation from the very start.

This was the design goal for my "CalGnome", which digests the PFLAA records - independent of the alarm info contained in these records - and creates its own

Only if these conditions are met it is reasonable to activate the flash. If the other pilot can see my plane early before the FLARM screems, that is a gain in security.

This is a simplified sketch (click on the picture to enlarge it) to clarify the situation.

The light brown triangular-egg-shaped form models the reception area of a FLARM, as you can see it when you check your antenna sensitivity and reception quality on the FLARM home page.

All planes inside this area are known to your FLARM by their PFLAA records (max 50). The FLARM issues such data records every second in a bulk. In a small subset of these records your FLARM will detect alarms (one of the three levels).

The planes which might create a FLARM alarm are inside the orange oval.

Only planes inside the grey-blue sector in front of your own plane will be considered worthy to flash by the CalGnome.

Planes marked as A induce FLARM alarms, but it would be futile to flash for them. Their pilots cannot see the flash.

The plane marked B will not neccessarily induce a FLARM alarm, because the FLARM forecasts this plane to have crossed my course before I cross its course. It would induce an alarm if these conditions were inverted and we would have a crash potential at the crossing point. Obviously for FLARM, alarms time and speed are an important factor.

However, the CalGnome will, independently of the threat recognized or not recognized by FLARM, always activate the flash for this pilot, because he can easily see my plane and the flash. If it has crossed my trajectory and the pilot can see my flash only by turning his head to a dangerous angle, the CalGnome abstains from flashing for this guy.

For all planes marked C FLARM and CalGnome do concur: Alarm and flash.

Planes marked D would never induce FLARM alarms, but if their pilots can see your flash, the flash gets activated. Planes marked E will not induce flashing.

Planes marked F are outside the visible angle for the flash, their pilots would not see the flash. So the CalGnome does not flash for them.

The G plane is too far away, if it is coming closer than 10 km, the flash will be fired.

These are - coarsely - the rules which govern the decision making of the CalGnome. There are some more detailed rules, in particular concerning circling planes and concerning relative altitudes along the forecasted flight path.

When you compare situations where the CalGnome activates the flash and the FLARM issues an alarm, then FLARM alarms are very rare.

The analysis of NMEA logs of 28 flights in Germany and Southern France indicates, that the CalGnome decides that in between 1 and 11 % of the flight time in average LED flashes would be visible and informative for other pilots, but only in less than 1 % of all flight time FLARM alarms were raised.

The CalGnome fires up the flash at 10 km distance, provided the reception area of your FLARM is good enough, but always independent from approach speed or alarm level of the FLARM.

This should provide ample time to your opponent to do his see and avoid maneuvre.

Those aweful surprise situations are avoided, blood pressures stays in reasonable bounds, FLARM alarms do not come up, there is no frenzy to identify the silhouette of approaching plane against the grey of the horizon under the clouds.

A Power-FLARM with its increased reception abilities is payed for with the first crash avoided. 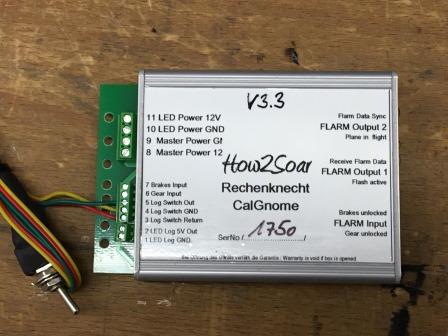 BTW: The CalGnome detects planes in stealth mode at normal distances and uses a wide latitude to activate the flash.

And BTW: The CalGnome detects ADS-B records and activates the flash even as that might mean that the opponent is in the rear quadrants. ADS-B records do not provide relative direction and altitude,

And for sure you can override the CalGnome to force the flash into permanent mode.

And last not least the CalGnome can take into account the settings of air brakes and gear, so it can activate the flash in the landing phase and when you panic to get sucked in under a cloud street.